PHIL’S FRIDAY PREDICTION FOR SEPTEMBER 13, 2012: UNDER A KILLING MOON

Posted on 13 September 2012 by VeronicaThePajamaThief 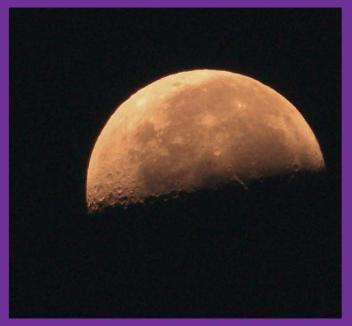 New flash fiction over at http://phlambler.blogspot.com/2012/09/the-prediction-look-out-hes-coming.html

UNDER A KILLING MOON

With the moon in half eclipse, they came out of the woods… anthropophagous creatures hungering for living flesh.

Kimoku stepped into the clearing… letting the katana dangle from her hand for a moment… then brought it up… moving toward the undead.

Spinning around, she swings the blade again… wading through the grisly beasts… leaving steaming entrails to dangle in the moonlight, dripping scarlet.

“You are avenged, my father.”

Bio: Veronica Marie Lewis-Shaw Born in Lisboa, Portugal to parents of Portuguese/Russian descent, Veronica Marie and her wife, Christina Anne, call the Pacific Northwest home, where the couple are “still very much on honeymoon!” When not teaching and finishing her own studies for a Masters in Sociology, Veronica writes fiction, primarily noir - "I love dark!". Her long fascination with noir fiction prompted Veronica to try her own hand at writing fiction several years ago. She has been published in Pulp Metal Magazine, The Lost Children: A Charity Anthology, the horror anthology 100 Horrors, from Cruentus Libri Press, Nightfalls: an End of the World anthology, Drunk On The Moon 2: A Roman Dalton anthology and Gloves Off: Near To the Knuckle's debut anthology. Veronica has also appeared in the inaugural issue of Literary Orphans magazine and her horror/urban fantasy short story SOUL TAKER was recently chosen for inclusion in Lily Childs' february femmes fatales, an urban fantasy/horror anthology. Veronica counts among her mentors - Carole A Parker, Lily Childs, Paul D Brazill, Richard Godwin, Joyce Juzwik and Vicki Abelson. She is currently working on the third draft of her first novel – a memoir – as well the second draft of her first fiction novel, a fantasy novel and the publication of a collection of her flash fiction and short stories. Lily's The Feardom and Vicki Abelson's Women Who Write Facebook writing group have both been a tremendous source of support and inspiration for Veronica. Veronica’s writings can be found athttp://veronicathepajamathief.blogspot.com/ andhttp://veronicathepajamathiefwritespoetry.blogspot.com/, andhttps://veronicathepajamathief.wordpress.com/
View all posts by VeronicaThePajamaThief →
This entry was posted in Fiction, Flash Fiction, Horror and tagged fiction, flash, katana, killing, moon, phil's friday prediction, vengeance, zombie. Bookmark the permalink.